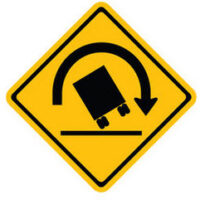 Three men were injured and required hospitalization after an accident in which the tractor trailer that they were riding in rolled over. According to reports, the accident happened when the driver lost control of the tractor trailer and hit a light post, then left the roadway and rolled over. No other vehicles were involved and no additional injuries were noted in the account of the accident, and investigators will likely continue to work on determining exactly what caused the accident to happen. In the meantime, the accident victims will work towards recovering from the injuries they sustained as a result of the incident.

Rollover crashes are common with certain types of vehicles, including larger vehicles such as tractor trailers, and can cause devastating injuries to those involved in them. According to one source, well over half of rollover crashes involving larger trucks result in fatalities. Studies conducted by various groups including the Federal Motor Carrier Safety Administration have sought to provide understanding about what causes these types of accidents and what can be done to prevent them. As a result of their study, they found that nearly half of all rollover crashes occurred as a result of a truck driver’s failure to control the speed of their vehicles, particularly on curves, the load the truck is carrying, the truck’s brake condition, and road surface or intersection conditions. Looking at secondary causes, the study found that driver inattentiveness, fatigue, and distraction were often contributory. Other contributing causes included factors involving steering, such as over- or under-steering for road conditions or in reaction to sudden changes.

With our understanding of what types of factors will often lead to a rollover crash, truck drivers can work towards preventing the crashes from the start – as well as preventing the injuries that result from them. Some of the preventive measures that can help avoid the occurrence of a rollover crash include being alert, understanding the hazards associated with large trucks and how they contribute to rollover crashes, checking the truck for safety issues such as brakes, tires, and general roadworthiness, and careful analysis of the truck load itself. Taking the time to put some thought into these factors can save the headache, hassle, and even heartache that often comes with dealing with the aftermath of a rollover crash.

Have You Been Injured In A Truck Rollover Crash?

If you or a loved one has been involved in a truck rollover crash, you may be struggling to find ways to cope with your injuries and get back on your feet. At Boone & Davis, we understand the struggles associated with these issues and are here to help you get the relief you are entitled to receive. The truck accident attorneys at Boone & Davis have helped clients throughout the Fort Lauderdale area recover for losses sustained as a result of truck accidents. Our decades of experience will allow us to help you get the same results in your case. Do not delay – reach out us now to schedule your initial consultation at no cost or obligation to you. Contact Boone & Davis online or call us at 954.556.5260 to get started today.