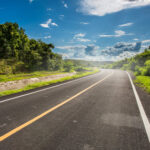 South Dade Senior High School’s principal faces a much different life as a result of a recent car accident, in which he was struck by a woman alleged to be driving her truck at a high rate of speed while under the influence of alcohol. According to the police reports, the driver struck a… Read More »