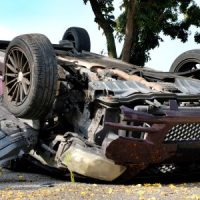 When we buy vehicles, we often focus on design, performance, and cost, assuming that all vehicles are equally safe. The reality, however, is that some vehicles are more prone to certain types of accidents than others. Sport Utility Vehicles (SUVs), for instance, which are among the most popular kinds of vehicles in the country, have a much higher risk of being involved in rollover accidents. For help recovering damages after your own rollover accident, please reach out to our experienced Fort Lauderdale car accident lawyers today.

Why are SUVs More Prone to Rollover Accidents?

While it is true that any vehicle can roll over, certain types of cars, including SUVs, trucks, and vans, tend to be more susceptible to rolling over due to the fact that they are more top-heavy and have a higher center of gravity, which makes them less stable. This means that any sideways pressure placed on an SUV while navigating a turn makes it more likely that the vehicle will roll over. The biggest risk of rolling over, however, occurs when an SUV strikes an object that catalyzes the loss of balance, such as a pothole, curb, or roadside shoulder. These are known as “tripped” rollovers.

Which of these kinds of rollover accidents a person is involved in will depend on the circumstances. Steep slope rollover accidents, for instance, usually only occur in off-road environments, while sideways skid rollovers are more likely to occur when the roads are icy or wet.

Rollover accidents tend to result in particularly severe injuries. To reduce their chances of being involved in this kind of crash, drivers should consider:

Unfortunately, even drivers who implement these measures could end up injured in an accident if their vehicle is improperly designed or manufactured, or if another driver is negligent. In these cases, the injured party can attempt to recover compensation from the at-fault party in court.