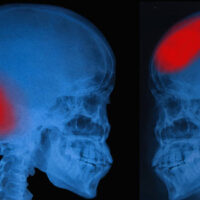 Although car accident victims can sustain a variety of different injuries, some of the most dangerous involve traumatic brain injury (TBI). In fact, the Centers for Disease Control and Prevention (CDC) reports that as many as one-third of all injury-related deaths in the country are caused by TBIs. In one year alone, TBIs were responsible for the deaths of 50,000 people and 280,000 hospitalizations. Treating TBIs is prohibitively expensive, especially since many victims are required to pay for ongoing care for the rest of their lives, which makes it even more important for injured parties to collect compensation from the at-fault parties. If you sustained a head injury in an accident caused by someone else’s negligence, it is important to retain an experienced auto accident attorney who can explain your legal options.

The CDC defines a TBI as a disruption in the normal functioning of the brain that is caused by a sudden blow, jolt, or penetrating injury. These kinds of sudden impacts can cause the brain to come into contact with the inside of the skull, which in turn can lead to the nerve cells in the brain being compressed, stretched, or even torn. This type of damage often manifests as one or more the following symptoms:

The severity of these types of symptoms depends largely on whether the injury was categorized as mild or severe. Generally, a brain injury is considered mild if the victim loses consciousness, becomes confused, or suffers from disorientation for less than 30 minutes after impact. Even though these types of TBIs are labeled mild, they can still significantly impact a person’s life, causing severe memory problems and mood swings.

When a head injury leads to a loss of consciousness for a period of time longer than 30 minutes and memory loss for more than 24 hours, a TBI is labeled severe. Severe TBIs impair higher level cognitive functions, which can significantly affect a person’s attention span or memory. Severe TBIs can also lead to changes in muscle function, such as impaired coordination and balance, as well as weakness or paralysis in the arms and legs. In addition to these problems, many TBI victims suffer from impaired perception and touch and may have difficulty seeing or hearing. It is also not uncommon for an injured party to experience emotional changes, such as mood swings, aggression, anxiety, and impulse control. In especially serious cases, a TBI victim may become comatose and remain in a long-term unresponsive state. Recovery often requires long-term rehabilitation and 24 hour nursing care.

Treating a TBI can be prohibitively expensive. If you or a loved one suffered a head injury in an accident that was caused by someone else’s negligent or reckless conduct, please contact Boone & Davis at 954-566-9919 to speak with an experienced auto Fort Lauderdale accident lawyer who can explain your legal options.