The Importance of Witness Statements in Your Car Accident Case 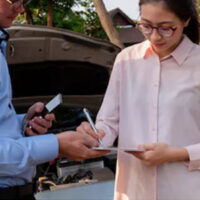 The resolution of car accident cases can be contentious, with both parties attempting to prove lack of fault. In these situations, a third party witness, or someone who saw the accident occur, can prove to be an invaluable resource in helping to establish the facts of a case. It can, however, be difficult to obtain a record of eyewitness testimony, so if you were recently involved in a car crash and need help collecting evidence, including statements from eyewitnesses, you should speak with an experienced Fort Lauderdale auto accident attorney who can help you.

Why is Eyewitness Testimony so Valuable?

Bystanders and other drivers are often the first people to establish contact with those who have been involved in car accidents and so can offer crucial contextual clues when it comes to describing the physical and environmental factors that could have contributed to the crash. In many cases, witnesses even have video recordings that can be used to help discover the facts surrounding an accident, or may have heard one of the parties admit fault immediately after the crash.

This type of evidence is especially important in cases where fault is contested and the parties who were involved in the accident don’t have other forms of convincing evidence, such as traffic camera recordings or extensive photographs of the scene of the accident. Furthermore, the testimony of third party witnesses is often given greater weight than the statements of those who were actually involved in the collision, as they are considered to be impartial and so not biased in a way that would result in an unfair damages award.

The first priority of those who are involved in car accidents should be to obtain medical care, both for themselves and for anyone else who sustained an injury. Those who are physically able, however, should consider collecting the contact information of any eyewitnesses who saw the accident occur. Potential witnesses could include the drivers and occupants of nearby vehicles, people who stopped to provide aid to the parties, adjacent business owners or customers, road workers, and even passersby. Regardless of who they are, injured parties should be sure to make note of the names, phone numbers, and addresses of these witnesses. This information can be used at a later date by a plaintiff’s legal team to obtain an official statement from the witnesses, which can then be utilized in proving liability for the accident to an insurer or court.

Many police reports also contain witness statements that were recorded by the officers who responded to the accident. This evidence can also be used by a plaintiff’s attorney, who can seek more information directly from the witnesses themselves.

Call Today for Help with Your Car Accident Claim

Please call Boone & Davis at 954-566-9919 today to learn more about the types of evidence you might need to file a successful car accident claim. A member of our dedicated car accident legal team can also be reached via online message.