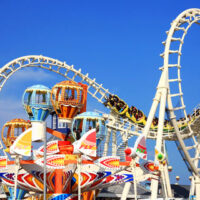 In June, a roller coaster accident at the Daytona Beach Boardwalk left eight people trapped on a ride, while two were thrown from their seats, falling nearly 17 feet to the ground. Although the initial cause of the accident was unknown, an investigation has since uncovered a history of failed inspections and operator error. Whether the amusement park will be held liable for the injuries sustained by the accident victims remains to be seen, but it is anticipated that several parties will file lawsuits in the coming months. To learn more about filing your own claim against an amusement park for its negligence, please contact one of our experienced theme park accident attorneys for advice.

A History of Failed Inspections

After last month’s devastating accident, which involved a rollercoaster known as the Sand Blaster, the Florida Department of Agriculture and Consumer Services initiated an investigation into the cause of the accident. It was quickly discovered that the ride, which was purchased by Daytona Beach in 2013 and had operated for nearly 40 years at a recently closed Delaware amusement park, failed two previous investigations in May for a number of deficiencies. In fact, in 2017, the roller coaster was given a failing grade by an inspector who discovered eight violations, including:

Many of these problems remained unaddressed at the time of the May inspection, where it was also discovered that the ride was suffering from:

While all of these issues raised concerns over the ride’s safety, investigators ultimately determined that it was the damage to the track and axles that were chiefly responsible for the accident in question.

Although the initial design of the rollercoaster, combined with wear and tear, were also found to be contributing factors, the primary cause of the accident was ultimately deemed to be operator error. Specifically, engineers found evidence indicating that the coaster had traveled at excessive speeds on a number of occasions, which in turn caused the wheels to lift off of the track, damaging the safety wheel system and the steel pipes that made up the tracks. In fact, the evidence indicated that derailments had occurred regularly over the preceding five years, all of which could be linked to excessive speed. State officials have acknowledged that the ride owners and engineer who certified the ride as safe knew or should have known that it was being operated in a manner that presented a risk to patrons.

If you were injured while visiting a theme park, you could be eligible for compensation to cover medical bills and lost wages. To learn more about your legal options, please contact us at Boone & Davis in Fort Lauderdale by calling 954-566-9919 today.