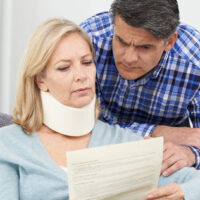 Some accident-related injuries reveal themselves immediately. A passenger who sustained a severe laceration when she hit her head on the window, for instance, would notice the injury right away and seek medical attention. Unfortunately, not all injuries manifest at the time of the accident. In fact, some injuries, such as whiplash and concussions are notorious for going undiagnosed for days or even weeks after an accident. These types of delayed symptoms are dangerous for a number of reasons. For example, it can make it more difficult for doctors to treat an injury if an accident victim does not immediately seek medical attention. Furthermore, it can make filing a claim for compensation much more complicated for the injured party who may find it harder to definitively provide a link between the accident and the injury.

To avoid these types of problems and to ensure that you stand the best possible chance of collecting compensation for your own crash-related injuries, you should strongly consider retaining an experienced car accident attorney who can represent your interests.

Many accident victims are reluctant to go to the doctor after a car crash. This is especially true for those who may not initially notice any symptoms. However, it is not uncommon for adrenaline to mask symptoms for a few hours or even days, so those who have been involved in a car crash should keep an eye out for the following signs, which may indicate that they unknowingly sustained an injury:

All of these symptoms should be addressed immediately if experienced by an accident victim, as delay can cause additional complications and make it much more difficult for the injured party to obtain compensation or medical expenses and lost wages from the responsible individual.

Early diagnosis is one of the best ways to keep an injury from worsening and in some cases, from becoming life-threatening. It can also make it easier for an accident victim to prove that an at-fault party’s negligence or recklessness can be directly linked to his or her injury. To begin the process of filing your own claim, please contact one of the experienced Fort Lauderdale car accident attorneys at Boone & Davis by calling 954-566-9919 today.