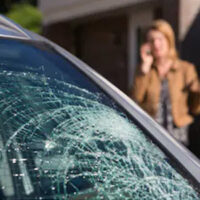 Some of the most severe car accidents are not necessarily the result of another driver’s negligence, but occur after a driver comes into contact with debris on the roadway. Flying debris, or debris that is airborne, tends to be particularly dangerous, as is often large, heavy, or traveling at high speeds. Whether a person collides with flying debris and sustains serious property damage, or collides with another vehicle as a result, these types of accidents are both dangerous and often expensive. For help recovering compensation for your own debris-related crash, please call our experienced Fort Lauderdale auto accident lawyers today.

The Dangers of Flying Debris

Most of us have experienced the surprise and annoyance of a chipped windshield caused by a flying rock that was kicked up by another vehicle on the road. While this is a natural part of driving at such high speeds and so near to other vehicles, there are also times when debris that is much larger than a piece of gravel, can fly off of another vehicle and strike the cars of others. The latter should not just be taken as part of the experience of driving, especially when the scenario could have been avoided if one of the drivers had taken adequate care to tie down his or her cargo. Instead, the injured party should seek compensation from the at-fault driver for the damage.

How Common are These Kinds of Accidents?

Accidents involving flying debris occur much more often than most people realize. One report published by AAA, for instance, revealed that over a four year period, around 200,000 crashes (caused by flying debris), occurred in the U.S. Those accidents resulted in nearly 40,000 injuries and as many as 500 deaths. Unfortunately, the report also found that the majority of those accidents could have been avoided, as more than two-thirds of the accidents that fell under this category were attributed to improper maintenance or unsecured loads.

Anything that flies off of, or out of a vehicle can qualify as road debris. Some types of debris, however, are more common than others. Blown-out tires, for instance, have become increasingly common on Florida roadways, as more and more vehicles find their way onto the road. Building supplies are another common example of flying debris, with everything from steel rods to plywood falling onto the roadway and into the paths of unsuspecting motorists. Sand or dirt from dump trucks can obscure a driver’s vision, while heavy equipment being hauled by semi-trucks can cause devastating multi-vehicle pile-ups if it isn’t sufficiently strapped down.

Florida law requires drivers who transport cargo, or who tow trailers, to adequately secure that cargo to keep it from flying out of the vehicle. Drivers (as well as their employers) who fail to abide by these rules can be held liable for resulting injuries.

If you were injured in an accident after you encountered flying debris on the freeway, please call 954-566-9919 to speak with the dedicated Florida car accidents lawyers at Boone & Davis about seeking compensation for your losses.