The Dangers of Distracted Driving 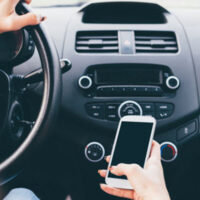 It has become abundantly clear in recent years that distracted driving is one of the most dangerous behaviors in which motorists can engage when behind the wheel. It’s important for those who have been involved in accidents caused by distracted drivers, however, to note that they do have options when it comes to recovery. In fact, injured parties who have proof that another driver was distracted at the time of a crash, may have even more options for collecting compensation than a person might otherwise have in a typical negligence-based case. Proving that a driver was distracted can, however, be difficult, so if you or a loved one were injured by a distracted driver, you should speak with an experienced Fort Lauderdale auto accident lawyer about the best way to go about building your case.

There are many different types of distraction for drivers, with common examples including everything from fiddling with the GPS or talking to a passenger to daydreaming or spilling a hot beverage. All distractions can, however, be broken down into three categories: manual, which involves actually taking your hands off of the wheel; visual, which involves taking your eyes off of the road, and; cognitive, which occurs when you take your mind off of the act of driving. These different distractions also affect our senses differently, with the most dangerous distractions falling under multiple categories.

One of the most common and dangerous distractions to engage in when driving is using one’s cell phone, particularly texting, which falls under all three categories of distraction. In fact, recent studies have revealed that someone who uses a cell phone while driving is 23 times more likely to cause a crash than someone who is driving while distraction free. Because it is so dangerous, many states have begun enacting laws that strictly prohibit the use of cell phones while driving. This is also true in Florida, which passed a law only last year prohibiting manual texting while driving.

These laws play an important role not only in discouraging dangerous activities, but in providing injured parties with the opportunity to take advantage of a doctrine known as negligence per se. In standard negligence-based cases, plaintiffs are required to establish that someone else’s carelessness caused their accident. This is not required, however, in cases that involve negligence per se, which is a doctrine stating that those who break a law that was specifically designed to protect a certain group of people, can be held negligent as a matter of law, with no further need to provide evidence of fault. This means that drivers who can prove that someone else was texting prior to causing their crash could actually have a much stronger case than someone who was filing a claim based on general carelessness.

If you were injured by a driver who wasn’t focusing on the road, please contact an experienced car accident lawyer at Boone & Davis by calling 954-566-9919. A member of our legal team is standing by to help you schedule an initial consultation today.