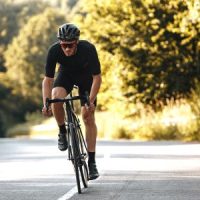 Even a collision at relatively low speeds can have devastating consequences for cyclists, who are lucky if they escape a crash with no injuries. Besides the impact from the initial crash, cyclists must also suffer the additional impact of striking the ground, putting them at risk of broken bones, head trauma, and lacerations. Unfortunately, even cyclists who wear helmets and other protective gear could sustain a serious injury upon striking the asphalt. However, in a valiant effort to help cut down on the alarming number of cyclists who are injured by vehicles every year, some companies are proposing the use of airbag systems for bicyclists.

Recently, a Munich-based company revealed its most recent contribution to bicyclist safety innovation, launching a product that claims to integrate an airbag system into a backpack for cyclists. While the product functions as a regular backpack with a 4.75 gallon storage capacity, it also doubles as an airbag system that inflates upon impact, thereby reducing the force of impact in the event of a collision with a motorist.

The new sensor-controlled airbag system backpack reportedly inflates in around 0.02 seconds, or 200 milliseconds and, through inflatable shoulder pads, provides protection to a cyclist’s neck, shoulders, and chest area. A back protector is also integrated into the structure of the pack. Deployment is controlled by sensors that analyze the location of the rider around 1,100 times per second. If the sensor detects a fall, an electric igniter will cause the airbag to automatically deploy before the rider makes impact.

The sensor also connects to an electronic magnetic chest buckled around the waist, which, when unstrapped, allows the cyclist to bend over without deployment. When deployed, the impact force and braking acceleration that a cyclist experiences are said to be reduced by as much as 80 percent. The unit that triggers inflation is permanently fixed to the airbag and is made up of a battery, memory chips, and a number of interfaces. At only 1.76 pounds, the device has 32 hours of battery life and if deployed, can be re-used with a new cartridge.

Unfortunately, the airbag system backpack is still relatively new and many cyclists have yet to purchase it, or cannot afford it, leaving them at risk of serious injury. In other cases, a collision may be so severe that the most high-tech equipment won’t protect the cyclist from injury. It is, however, possible for injured cyclists to obtain compensation from the at-fault party who caused their crash and who can be required to reimburse the victim for medical bills, lost wages, property damage, and pain and suffering.

Bicycle accidents tend to be particularly traumatic for the cyclist, who is much more at risk of sustaining serious injuries. For help pursuing your own bicycle accident claim, call 954-566-9919 and set up a meeting with the dedicated Florida auto accident lawyers at Boone & Davis today.

By Boone & Davis | Posted on May 24, 2022
« Recovering Out-Of-Pocket Costs After A Car Accident
Liability For Accidents Caused By Driver Fatigue »