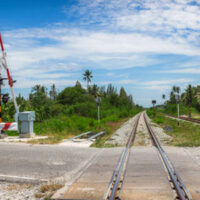 Although trains are perhaps not the first vehicle that comes to mind when we hear the word crash, a recent publication issued by the Federal Railroad Administration reveals that railroad accidents should be a legitimate concern for U.S. residents. This is especially true for those who work, travel, or live in Florida, which was rated sixth among the top ten states with the most rail road crossing fatalities in the country.

These types of accidents tend to have particularly devastating consequences, making it especially important for those who are injured in railroad accidents in Florida, to retain an experienced catastrophic injury attorney in Fort Lauderdale who can explain their legal options.

How Common are Railroad Accidents?

Where do Most Railroad Accidents Occur?

Based on federal data, most of the train crashes that occurred in Florida over the last four years took place in urban areas that had heavier pedestrian traffic, including Miami, Fort Lauderdale, and west Palm Beach. In 2017 alone, for instance, 76 people lost their lives on railroad tracks in south Florida. That year represented an all-time high for railroad accidents in Florida, as well as a ten year high for the country. Aside from pedestrians, occupants of school buses and motorcycle riders proved to be at a much higher risk of injury in this type of accident.

When this type of conduct results in an injury, the at-fault parties can be held liable for damages. This could include the company that owns the train, the entity responsible for maintaining or clearing the tracks, the train’s designer or manufacturer, or the municipality, county, or state where the accident occurred.

To find out whether you or a loved one have a valid railway accident claim against the entity or individual that caused your own injuries, please call the dedicated Fort Lauderdale catastrophic injury lawyers at Boone & Davis today. A member of our legal team can be reached at 954-566-9919 or via online message, so please don’t hesitate to call or contact us online at your earliest convenience.