Did You Suffer Blunt Force Head Trauma In An Accident? 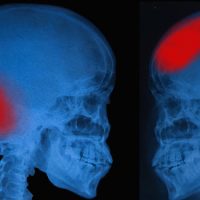 Most of us have experienced some type of bump to the head at some point in our lives. Maybe you struck your head on an open cupboard door, or suffered a fall as a child while playing sports. These, and similar injuries, are common examples of blunt force head trauma. Any type of blow to the head can be painful, but sometimes the harm can be much worse than a bruise, bump, or small cut. When enough force is involved, blunt force trauma to the head can even result in a concussion or other type of traumatic brain injury. An estimated 64,000 people passed away after suffering a traumatic brain injury in the U.S. in 2020 alone.

Basically, blunt force trauma can occur in any situation where a person’s head suffers a sudden, jolting impact.

Head injuries are typically classified as either being, mild, moderate, or severe, depending on the severity of the impact and the duration of the symptoms. Mild head trauma could result in confusion and headaches, while moderate head injuries tend to affect an injured party’s vision and result in more prolonged and painful headaches. In cases of severe trauma, an injured party will typically lose consciousness and may experience seizures and long-lasting memory loss. Ultimately, the severity and duration of these symptoms will depend on the degree of force involved in the injury.

Whether it occurred as a result of a fall, a car crash, or some other accident, it’s possible that a party who suffered from head trauma could be entitled to compensation if the accident was the result of someone else’s negligence. Potential damages include reimbursement for:

For help calculating your own potential settlement or damages award, reach out to our traumatic brain injury legal team today.

If you or a loved one suffered a head injury as a result of accident-related blunt force trauma, feel free to call the dedicated Florida traumatic brain injury lawyers at Boone & Davis for help seeking compensation for your accident-related losses. You can set up a meeting with our legal team by calling 954-566-9919 or by completing one of our online contact forms.

By Boone & Davis | Posted on September 26, 2022
« Car Accident-Related Facial Injuries
Were You The Victim Of Distracted Driving? »