Who Is Responsible For Pothole Accidents? 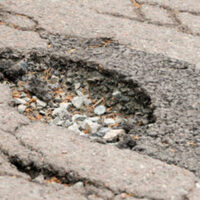 Determining fault for a car crash can be simple. An intoxicated driver, for instance, that sped through an intersection and collided with another vehicle, would clearly be at fault for the crash. The situation becomes a bit more complicated in other cases, especially those involving road hazards and defects. Who, for instance, is responsible for an accident in which a person struck another vehicle while attempting to avoid a dangerous pothole? The answer to this question will depend largely on the specific facts of the case, including the reasonableness of the driver’s actions in swerving. It could also be possible, however, to hold a government agency or third party contractor at least partially liable for collision-related injuries and property damage. For help determining who was at fault for your own pothole crash, please call one of our dedicated Fort Lauderdale auto accident lawyers today.

The Problem of Potholes

While some people associate potholes with roads in states that experience harsh or inclement weather, like snowstorms, sleet, or hail, states with less severe weather still see their fair share of potholes. In Florida’s case, these potholes aren’t typically the result of the freezing and thawing of the roadways, but by the heavy traffic that is common on the state’s roads. Excessive rainfall only exacerbates this problem, with rainwater finding its way into, and worsening, existing potholes. In some cases, potholes are also attributable to road design or even the use of improper materials during construction. Unfortunately, whatever the cause, potholes only tend to become worse if ignored or left unaddressed, expanding and becoming an even more serious hazard.

All Florida drivers are required to exercise reasonable care when driving. Potholes, however, can be tricky, as many motorists would agree that swerving out of the way of a pothole may be more reasonable than striking it head-on. If a jury agrees with this argument and either absolves that driver of responsibility for the crash, or lowers his or her percentage of fault in causing the collision, an accident victim could end up facing a lower damages award.

Fortunately, there are other options for victims of pothole accidents. It is possible in some cases, for instance, to file a claim against the government agency, whether municipal or state, that is responsible for ensuring the safety of the roads by conducting inspections, doing maintenance, and making repairs. If there is evidence that an agency knew about the problem, (i.e. the pothole was especially large or had been there for many months) then an injured party could recover a portion of his or her damages from that entity. There are, however, special rules in place for filing a claim against government agencies, making it especially important for those injured in pothole accidents to reach out to an attorney for help.

Were You Involved in a Pothole Accident?

To speak with an experienced Florida car accident lawyer about how to go about recovering losses for your own pothole accident, please call Boone & Davis at 954-566-9919 today.