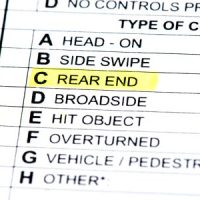 Regardless of the severity of a crash, accident victims who plan on filing an insurance claim should be sure to contact law enforcement officers, who will investigate and file a police report. While this is not the only evidence needed to prove fault for an accident, these reports can play a crucial role in validating a claim for compensation based on the negligence of another driver. To learn more about the types of evidence that you’ll need to file a successful accident claim, consider reaching out to a Fort Lauderdale car accident attorney for advice.

When law enforcement officers arrive at the scene of a car accident, they have a number of objectives, including ensuring the safety of the parties involved and the safe flow of traffic. They are also, however, obligated to complete an accident report that will serve as an objective third party account of what happened on the day in question. To this end, officers usually make note of any factors that could have contributed to a crash, including:

Reports can also note how the drivers acted after the accident and how their actions prior to the crash could have contributed to it.

Besides creating a narrative of the course of events leading up to, during, and after the crash, police officers can also collect the contact information of eyewitnesses, as well as their statements. This is especially important in serious cases, when injuries prevent the parties involved from obtaining the contact information themselves. Passersby, for instance, are often able to describe exactly what happened in the accident, or in the case of a hit and run, can provide a description of the other vehicle, or even a license plate number.

Police reports will also note whether any of the drivers involved in the crash were issued a citation for committing a traffic violation for:

If one of the drivers gets a ticket, that citation can be used as a strong piece of evidence to prove that he or she was at fault for the crash.

Police reports also describe the damage sustained by the vehicles involved in the accident. The location of the damage, for instance, can indicate at what speeds the vehicles were traveling prior to the accident, which direction the cars were traveling, and which vehicle struck the other. A police report can also detail the injuries and complaints that the parties reported at the time of the accident. Without this link, an injured party could have a hard time proving that his or her injury can be attributed to a particular accident.

Contact the experienced Florida car accident lawyers at Boone & Davis to learn more about the kinds of evidence you could need when filing an accident claim. You can reach us at 954-566-9919 or by completing one of our online contact forms.

By Boone & Davis | Posted on May 3, 2022
« Could My Driving Record Affect My Injury Claim?
Collisions Caused By Stop Sign Violations »