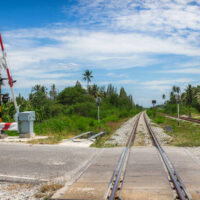 Often, when people think about train accidents, they imagine major collisions between two trains, or derailments, which occur when a train completely leaves the tracks. While these kinds of accidents do occur and usually have tragic results, the reality is that railroad crossing accidents are far more common. This is especially true in Florida, which has one of the nation’s highest rates of railroad crossing accidents.

Although many of these accidents can be attributed to human error, such as a motorist’s failure to abide by traffic lights and barriers, a surprising number are actually the result of defective signals, a train engineer’s negligence, or poor track maintenance. In these cases, injured parties or their loved ones can collect compensation to cover the cost of medical bills, lost wages, and pain and suffering. Unfortunately, filing claims against railroads is notoriously difficult and often involves filing suits against multiple parties, so if you or a relative were involved in a railroad crossing collision, please contact an experienced catastrophic injury attorney for help.

In response to the rash of train accident fatalities occurring across Florida, many cities are installing new barriers, known as quad gates at railroad crossings. These gates, unlike their standard counterparts, which only have one or two gates, cover all corners of an intersection, making it much more difficult for motorists and pedestrians to get past them. Unfortunately, only about 60 railroad crossings will have these new barriers, as it costs around $500,000 per gate to have them installed. This is not a problem unique to Florida, as only 862 quad gates have been installed across the country, although there are approximately 131,000 public crossings.

These are not the only measures being taken by city officials in response to the high rate of railroad collisions in the state. For instance, in Delray Beach, officials began installing fencing and other improvements to create a barrier on either side of a track, where a woman tragically lost her life in 2016 after tripping on the rails. Authorities in West Palm Beach and Hollywood have also begun inspecting crossings in their areas and are considering placing fencing and landscaping to act as a buffer between pedestrians and trains.

It is unlikely that these new measures will prevent all future accidents at railroad crossings. In fact, there are a number of crossings along the tracks where new high speed Brightline trains have begun running that will not have any type of fencing or barriers. Unfortunately, it is poorly marked crossings and inoperative equipment that are the very causes of most railroad crossing collisions.

Being involved in a train collision is often deadly, so motorists and pedestrians are strongly encouraged to remain vigilant when approaching tracks, refraining from walking on the tracks themselves, and crossing tracks only at designated crossings.

Please contact us at Boone & Davis in Fort Lauderdale by calling 954-566-9919 to learn more about collecting compensation for your own train-accident related injuries. Initial evaluations are conducted free of charge