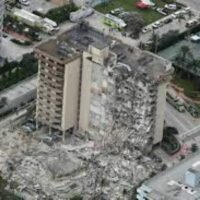 It is reported that 55 units completely collapsed, the building has over 300 units in total. 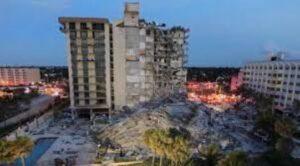 Unfortunately, at least one person was killed and dozens were injured.  First responders are working tirelessly to remove rubble and locate missing persons.

The collapse sent a shadow of debris through the streets. A large section of the ocean-view side of the building disintegrated into a pile of rubble.

Multiple people are being treated at nearby Aventura hospital. Unfortunately, there are reports that the condo building was quite full, and the death toll is likely to rise. It is also possible the rest of the building could collapse.

The fire department has yet to say what may have caused the collapse.

Burkett said that roof work had been ongoing at the building over the past month but said he was unsure whether that was a factor. He said it was “hard to imagine that could have been the impetus for a catastrophic collapse,” adding that it was “not an old building. … There’s no reason for this building to go down like that.”

Boone and Davis, P.A. is here to help:

Building collapses are, normally, very preventable, particularly since there are so many regulations in place to prevent such tragic events. Sometimes buildings are not “up to code,” which refers to strict construction guidelines regulating condo buildings like this. Sadly, while there are many factors that can cause a building collapse, the most common causes have some element of human error, or even worse, human greed.

Boone and Davis, P.A. will be investigating this collapse and will be here to help any victims of this tragic event.