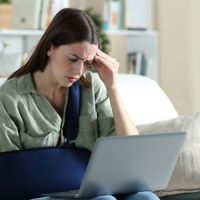 The surge of adrenaline that so often accompanies a car accident can mask the symptoms of severe injuries. For this reason, or merely out of an attempt to avoid causing trouble, many car accident victims fail to seek medical attention after their crashes. This, however, should be avoided, as failing to obtain, or even delaying treatment can have significant repercussions for an accident claim. Properly reporting an injury can go a long way towards protecting an accident victim’s legal rights down the road.

Getting the Best Treatment

After being involved in a car crash, the priority for the parties involved should be their health. By seeking medical treatment immediately after a car accident, an injured party can ensure that he or she receives treatment as soon as possible. Any ache or pain, from a headache to a bruise should be reported to the doctor at this time, as what could seem like a minor problem could actually be indicative of a more serious condition. This is often the case with delayed injuries, which sometimes don’t manifest for days or weeks after a crash, at which point, obtaining treatment may not be as helpful. By getting the opinion of a medical professional, an accident victim can benefit from early detection and the prevention of future harm.

This is also a good time for those who suffer from a pre existing medical condition to let the doctor know about it. While it could be unrelated to a current collision, the problem could also end up being exacerbated by the recent car wreck. Getting treatment early on can help keep the problem from getting worse, but can also establish a link between the most recent collision and the exacerbation of the preexisting condition, evidence that will be necessary for an injured party to recover compensation.

Florida is a no-fault state, which means that regardless of who caused a crash, the parties involved will need to go through their own insurers to recover compensation for related losses. If, however, an injured party’s coverage is exceeded, he or she can seek compensation from the other driver’s insurer. Unfortunately, insurers often try to avoid liability by pointing to an unreported injury as evidence that a motorist’s claim is false. By reporting accident-related injuries as soon as possible after a crash, a motorist can protect him or herself from an unscrupulous insurer, who may attempt to avoid being held responsible for an accident by claiming that the injured party took too long to obtain treatment. Insurers are also notorious for claiming to find inconsistencies in diagnosis and medical histories. To prevent this, motorists should do their best to accurately and thoroughly report their injuries as soon as possible after a crash.

Do You Need Help with Your Car Accident Claim?

To speak with an experienced Fort Lauderdale auto accident lawyer about your own legal options following a Florida car accident, please call Boone & Davis at 954-566-9919 or send us an online message today.

By Boone & Davis | Posted on May 10, 2022
« Collisions Caused By Stop Sign Violations
Determining Liability In A Line Of Sight Accident »